WHAT PEOPLE SAY ABOUT TRANSKING

Below are a number of testimonials from users of Transking products 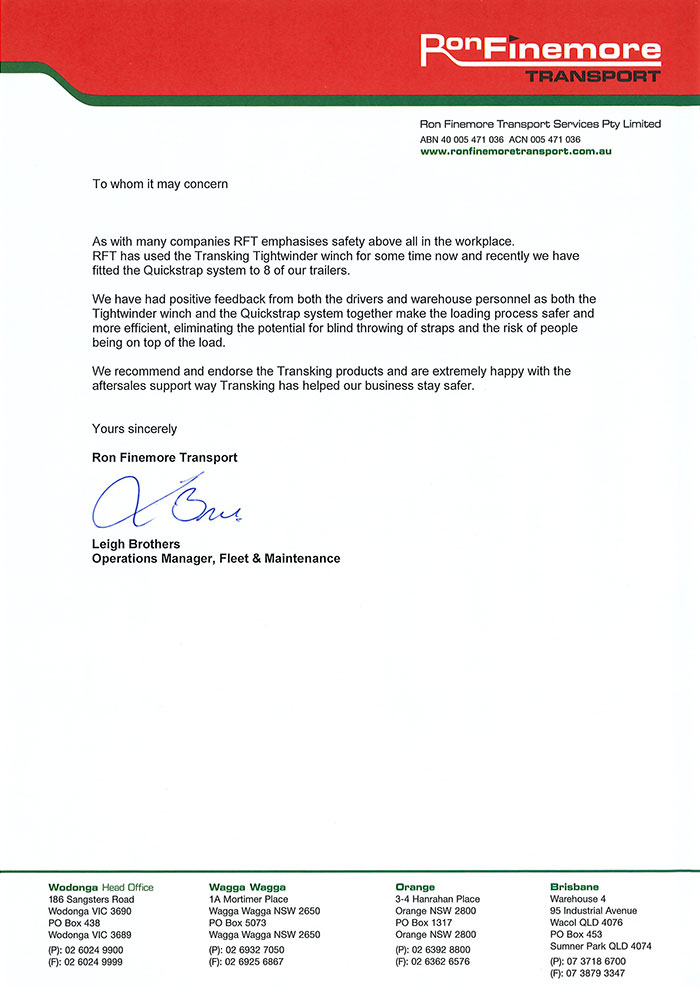 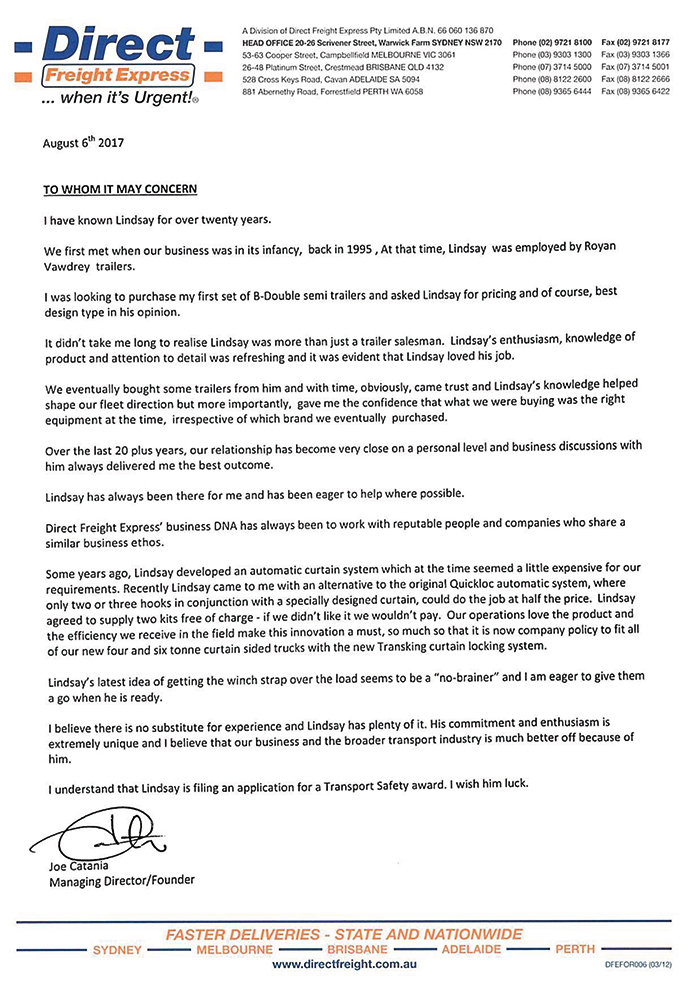 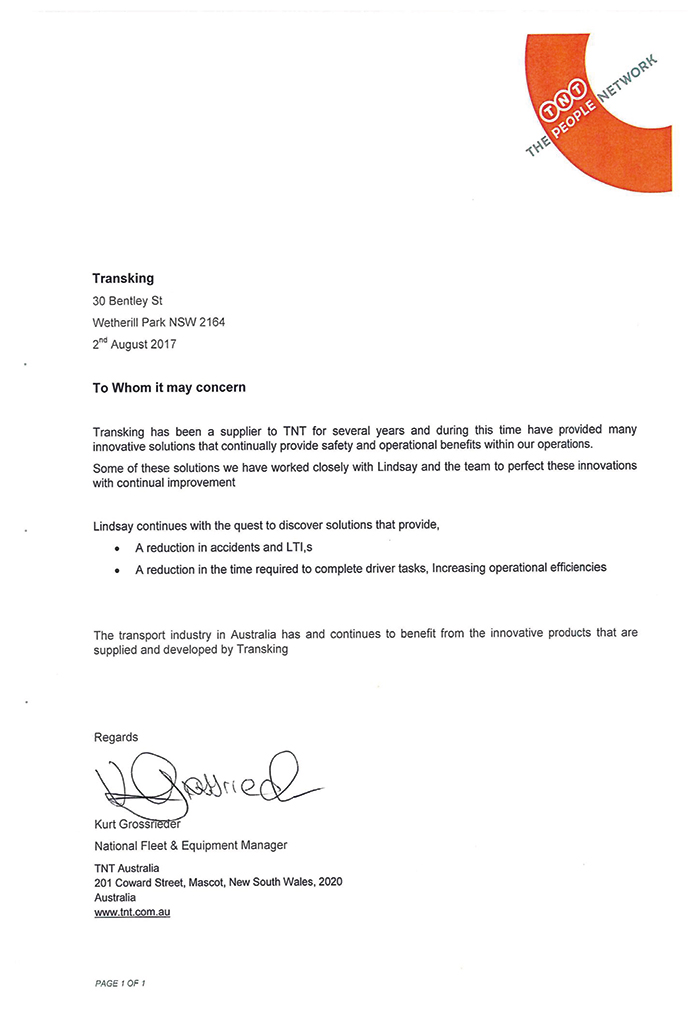 Mick was one of the original instigators of trialling and implementing the Tightwinder into the Linfox fleet in Australia followed by implementation in New Zealand.

The reason for changing to the Tightwinder is not unlike the others 1/ OH&S and 2/ effective load restraint. Mick is a complete supporter of the product, so much so that the whole Linfox NZ fleet (both new & refurb) is to be fitted with the product and is now a standard requirement. Mick believes the product best addresses a particular policy in the NZ steel industry, that states when using dogs and chains a bar cannot be used for injury reasons. The Tightwinder ensures necessary load restrain with minimal effort. Mick says that the NZ trucking industry is approximately 20% the size of Australia’s trucking industry however the response has been enormous. He says there is tremendous need for greater marketing activity in NZ.

In 2005 Linfox NZ will be requiring approximately new 200 Tightwinder units to fulfill their new and refurbished trailer requirement. Mick is prepared to negotiate a long term contract to ensure product availability (manufacture) and price control.

The only negatives that Mick sees is possible loss of handle, cost is not an issue and the requirement for a greater level of product promotion, more industry awareness both in Australia and New Zealand.

The primary attraction for Steve was the way in which the product addressed the OH&S requirement. He regularly replaces old winches with the new Tightwinder and will mix them up on a trailer. Would prefer not to but will where necessary. Steve’s refurbishment of trailers is a huge market and he wants to offer the best possible product to clients.

Steve would like to see a greater awareness of the product happening in the industry via events (suggested the Truck Show in Brisbane) and educating the drivers directly. He would also like to see them in the spare parts division of maybe Paccar and Mack Trucks.

To assist in educating his clients he would like to see a video presentation provided for viewing on the showroom and at their leisure.

He would also like to see maybe a lightweight version due to the additional weight they add to the trailer.

Starting a business from scratch, is nothing more than hard work, with little or no reward in the first five years, and it doesn’t get any easier in the next five years. With the advent of Tautliners, life became a whole lot easier.

Our company ordered its first 20 Pallet Tautliner from SX Trailers. A second unit was ordered within six months. We then asked Lindsay King (SX) to manufacture, Four rigid body Tautliners for our Whitegoods distribution & general freight.

Twenty years has passed & our association with Lindsay has continued, through his Innovative approach to making life easier for the Co. & drivers alike.

We have been operating the – Transking Quickloc System since its inception,& now have Six of the Quickloc units operating daily. The time saved using the Quickloc, quickly covers the initial cost of the system.

This to us is the best system available, but knowing Lindsay, he will continue to make improvements where possible.

TO WHOM IT MAY CONCERN
Mountain Industries is a Transport & Logistics Company located in Newcastle in the Hunter valley NSW.  In December 2007 we were awarded the export contract for Hydro Aluminum Company, one of two smelters located in the Hunter Valley.  One is located some 45 kms from our site, the other approximately 20 kms away.  The volumes involved required the employment of four B Doubles operating daily between each smelter and our site which contains a rail siding and container packing area.

Up until this time aluminum metal had always been restrained using dogs and chains which aside from the traditional dangers involved, also required drivers to be on top of trailers during the load securing process.

Mountain Industries decided to investigate the possible use of winches and web straps as the preferred restraint method.  After consultation with the NSW RTA we engaged the services of known and respected restraint engineer, Mr Ian Wright of Melbourne.  We chose to trial two types of equipment one of which was the Transking supplied by Mr Lindsay King.  The trials were extensive and demanding on the equipment involved and involved testing in controlled conditions beyond the recommended safe working capacity of the winches and straps.  The final recommendation of the report which was accepted by both the smelters and the RTA was that under given conditions winches and straps provided the necessary restraint properties to meet the requirements of the Load Restraint Guide.  At that point in time Mr King was still going through the developmental process of his product and there were some problems.  However he was always there ready to support his product, work with us and his supplier to over come any short comings to the point we are at today.  It has been a highly successful operation due in no small way to the efforts and persistence of Mr King.  We have been operating the equipment for just on two years now and I am pleased to say have not had any sort of incident involving loss of load or similar.  Thousands of tones of product have been moved during that time.  We have a regular, detailed inspection and maintenance program designed to keep the equipment in good working order.  As a result of our testing, we have been able to equip our drivers with the appropriate tension wrenches so that they know they are always applying the minimum tension required to safely restrain their loads.

I would have no hesitation in recommending the Transking product in any application where the restraint requirements were known and a safe reliable product was required.

In memory of Adrian who had significant input into the development and the upgrade of the Transking Tightwinder which has led to its success.